It’s past time that we started planning the Critical Lass Summer 2010 style ride, so, let’s get to it!


As we’ve said in our previous CL posts, we love that simply by riding with our friends in fashionable clothes we can promote cycling as an approachable, fun, everyday activity. It’s August, so think breezy and easy when you’re choosing your outfit: linen, hemp, seersucker, polka dots, madras plaid, that great artisan jewelry you bought at Folk Fest, sunscreen. We’ll be providing pins again, this time in the red-violet that’s all over the fashions for this summer and fall: 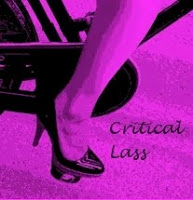 We thought this time we’d make the ride more family-friendly and suburban, just to show that we can. I’m going to propose two possible routes through the Riverbend-Terwillegar neighborhood below, and get you to vote on which sounds like more fun to you in the comments. Both routes will be fairly level, take some combination of paved multiuse trails and suburban roads, and form a loop (to make it easier for those who need to take another form of transportation here). If you have kids, please feel free to bring them along in a bike trailer or on a trailer-bike (or a box-bike like the Madsen – yes, Sarah, I am looking in your direction *nudgenudgewinkwink*).


Oh, about helmets: Yes, we will be riding slowly on multiuse paths and suburban roads, and since you are likely over 18 years old, you can weigh the actual risk of head injury and legally choose not to wear one. Whatever. However, anyone under 18 in Alberta *is* legally obligated to wear a helmet, which may be a hypocritical double standard, ignored by the vast majority of teenagers, and left unenforced, but… there it is. It’s the law here. Whatever your opinion about helmet laws, our choices send a message and set an example for any kids in attendance (including mine) and kids who see us ride past. There’s also a tonne of anecdotal evidence that North American cyclists who do not wear helmets can run up against harsh prejudices that undercut the truth of cycling (safe, fun, easy) that we’re trying to demonstrate. Let’s show them how awesome a helmet can look, yeah?


Here are the deets:


Date: Sunday, August 15th or 22nd, 2010
Time: 1:00pm gather time, depart at 1:30pm (giving ourselves more time so our kids can play and we can do casual pre-ride photos – no press will be invited this time)
Starting Point: the Tomlinson Park playground in Terwillegar Towne
Route to include:  TBA* update: see Proposed Route 1
End Point: BBQ at Deborah’s home
For contact info (if you might be late, wanting to meet up with us at a later point, etc) send a DM to me (@ecoDomestica) or Angel (@angelzilla) on twitter so we can exchange cell numbers.


*Proposed route 1: from Tomlinson Park playground to Riverbend Square shopping/cafe area via Haddow Drive, Riverbend Road and Rabbit Hill Road (primarily on residential roads); back to Deborah’s via Falconer Road, the east-west multiuse trail over Terwillegar Drive, and Towne Centre Boulevard. See this walking map (PDF) for reference. This is the longer of the two routes, spends more time on quiet residential streets, and possible midpoint destinations include shopping at indie toy store Laugh N Learn, a visit to the library, smoothies at Booster Juice, and snacks from a couple of different bakeries. (Not to mention the frozen food aisle of the grocery store.) It also passes two additional playgrounds that will make good stopping points if we are bringing children along. Update: this will be our route.


*Proposed route 2: from Tomlinson Park playground to the cluster of shops and restaurants at the corner of Rabbit Hill Road and 23rd Ave, via the multiuse path through the big park beside Tory Road (like the reverse of the last part of this ride), then back to Deborah’s via Rabbit Hill Road, the east-west multiuse trail, and Towne Centre Boulevard. This is the shorter of the two routes, spends more time on multiuse trails (but includes crossing a very busy intersection, probably on foot), and possible midpoint destinations include shopping at Jilly’s Home & Lifestyle, gelato at Famoso Neapolitan Pizzeria, and iced coffees or lemonades at Second Cup or Tim Horton’s. (Not to mention the frozen food aisle of the grocery store.) It has fewer child-friendly stopping points.


A third possibility would be to head for the east-west trail and take it, with picnic supplies, down into the river valley – but that route is not as flat as some have requested, so will not be used. 😉


To get here from downtown or the university area: take the LRT all the way south to Century Park LRT Station. Then either cycle west on 23rd Ave (the bike route map dates to 2007, and there is now a wide sidewalk on the north side of the road the entire way which is treated as a multiuse trail by almost every cyclist I see on busy 23rd Ave), or take route 334 bus (or route 336 from Southgate LRT Station – but there is no bike rack on either, booooo), to Leger Transit Centre – and then cross 23rd at the lights to get on Towne Centre Boulevard. Your second right is Tomlinson Way, and at the bottom of that (not steep) hill is Tomlinson Park playground.
Route 30 has bus bike racks and goes from Century Park LRT station to Leger Transit Centre – but does not run on Sundays. Hmmm. Maybe we need to move from a Sunday (15th or 22nd) to a Saturday (14th or 21st)?


*Ok, we need your votes: which date works best for you? Which route do you prefer? If you’re bringing your kids, how old are they and how will they ride? And: go!


Aug 12th Update: As you see from the italicized edits above, voting is now closed and our date is set for this coming Sunday. The forecast is currently sunny and a high of 24C, so dress accordingly & bring sunscreen! For those of you staying for the barbeque, please let me know if you can bring some food – both so I can ensure there isn’t too much duplication and to make sure everything planned is okay for our peanut-free household.


Looking ahead: we hope to arrange for another Critical Lass ride and possibly a vintage-bike-appreciation ride in the next couple of months. We also hope there will soon be news from EBC about an Autumn 2010 Edmonton Tweed Ride… so much to look forward to!