How do I get there? How do I find a route that feels safe but is still reasonably direct and, if I’m really lucky, enjoyable? Recreational bike paths are great fun, but don’t really help you when you just need to get around town. Many city bike lanes are on busy arterial streets that can be intimidating to potential cyclists and are not particularly family-friendly.

Enter the Neighbourhood Greenways (previously called Bike Boulevards). These are quiet streets that give priority to cyclists and pedestrians, while still allowing motorized traffic at lower speeds. They’re for people who don’t want to ride on the busy arterial streets, but still need to go somewhere. I’ve been a seasonal bicycle commuter for the last couple of years, and am moderately comfortable in traffic. However, when I make short neighbourhood trips, I prefer a low key route, particularly when towing my 5 year old on the trail-a-bike. It’s a dramatically different experience – I’m much slower and less agile with the trail-a-bike and ride much more conservatively. For instance, I need a much larger gap in traffic when crossing intersections.
The Neighbourhood Greenway idea is gaining momentum here in Seattle. Last week had some terrific blog posts describing both the concept and details of the campaign to bring them to Seattle:
http://seattlebikeblog.com/tag/neighborhood-powered-streets
http://totcycle.com/blog/neighborhood-greenways-in-ballard.html 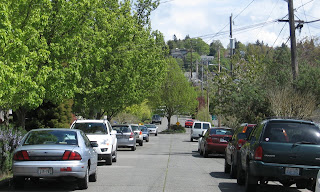 Much of NW Seattle (including the Ballard, Greenwood and Crown Hill neighborhoods) should be well suited to this. The streets are laid out in a reasonably regular grid. It’s relatively flat, by Seattle standards, at least until you reach Phinney Ridge. Traffic calming measures, such as traffic circles and speed bumps, are already common to reduce speeds on residential streets and funnel through-traffic onto the arterials. The above photo is of a typical residential street in this area. It’s narrow – allowing parking on both sides of the street means that only a single car can pass at a time. This is actually an advantage to cyclists, as drivers are already used to going slow and taking turns to let each other pass. 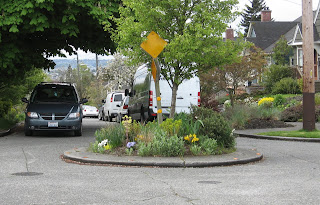 Traffic circles, like the one above, dramatically slow vehicle speeds. Frankly, it’s annoying to drive around more than one or two at a time. In contrast, bikes can pass by them with only a slight curve – they’re really a piece of cake.
So, what’s special about a Neighbourhood Greenway? How is it different than just riding on the residential streets already there?
1. Priorities at intersections. Currently, it’s difficult, if not impossible, to cross arterials without a traffic light.
2. Signs and paint to make it clear that this is a pedestrian and cyclist-friendly space.
3. Promoting a network. I think it’s great that folks in Seattle are thinking in terms of a network of Greenways – that’s key to making them useful on an everyday basis, as opposed to a once-a-month recreation or novelty. This also presents novice cyclists with clear routes to reachable destinations. Such a contrast to the current situation where every new cyclist has to figure it out for themselves.
Over the next couple of months, I plan to ride many of the proposed routes to get a feel for the advantages and disadvantages of the different options. Along the way, I’ll post a few photos and my thoughts on the plans.