Update at the bottom:

One of the key aspects of creating walkable and bikeable neighbourhoods is to funnel traffic onto arterial streets and use traffic calming measures on the residential streets. For the most part, this seems to work pretty well in my neighborhood. Frequent speed bumps and traffic circles keep traffic speeds low and discourage cut-through traffic. The streets are narrow and tree-lined, making it pleasant for walking. It’s quiet enough that I can give my son a little more freedom and let him run or bike to the corner on his own, though he still needs to wait for me to cross the street. It’s a pretty comfortable environment for novice cyclists as well.

Until…you reach the arterials. These busy streets have high traffic volumes and speeds and often no safe way across for pedestrians and cyclists. If there is a street light, it’s only triggered by the presence of a car on the secondary street – a cyclist can wait until nightfall without getting a green light. These arterials effectively form a moat or wall, separating my neighbourhood from parks, stores, friends – all the places that I want to use my bike to get to. Now, when I’m riding on my own, I can watch the traffic and usually find a gap between the cars that is big enough to dash across the road, even if it is a little hair-raising. When riding with my son, though, I was forced to either make a substantial detour to find a friendlier crossing or to dismount, hop up onto the sidewalk and press the button to trigger the pedestrian signal. Both options are annoying.
Last fall, my world changed. I discovered the Magic Stoplights. When a secondary street crosses an arterial, the city of Seattle typically installs an induction coil. If a car is waiting, the metal in the car triggers the switch, changing the light on the secondary street from red to green. In the photo below, you can just see the circular cut in the pavement where the induction coil was installed. What I didn’t know is that a bike can trigger also trigger the switch! Because a bicycle has so much less metal than a car, position is key. You have to place your front tire on the little white T, approximately at 9:00 or 3:00 on the circle. 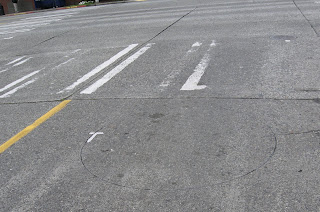 Placing a bike wheel on the “T” triggers the green light.
SDOT has recently changed the marking to the cute little cyclist shown below. I haven’t seen any in my neighbourhood, but I have spotted one or two around the city.

Photo courtesy of Seattlebikeblog.com
This seems so simple, but it makes a world of difference in finding safe, convenient routes to our destinations. It’s a great compromise, allowing safe crossings to cyclists, while maintaining good traffic flow on the arterials.
The main gap now is publicity – far too many cyclists have no idea what the markings mean. Every time I see a cyclist waiting for the light at the wrong spot, I make a point of telling them how to do it. I’m on a mission to spread the word!
Update: I was as at a neighbourhood meeting last night and chatted with a real, live traffic engineer. Apparently, the little white T marks the position of the induction lead, so positioning yourself on the opposite side of the circle won’t work. Also, he recommended placing the crank over the T, as that’s the part of the bike with the most metal. If you have a steel frame, it probably won’t matter, but if you have a carbon fork, the front wheel may not have enough metal to trigger the switch. I tried this on my way home, but, alas, I found I couldn’t trigger the switch no matter what I did. I’ve wondered about that particular intersection before, but there are always enough drivers and pedestrians around during commuting hours that some one always triggered the light before long. Looks like I’ll have to call SDOT on Monday.

6 thoughts on “The Magic Stoplight – Updated”