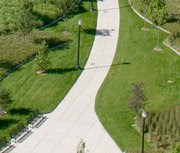 If you’ve talked to me in person in the last few months, you’ve probably heard me talking about Neighborhood Greenways*. To crib from a previous post “These are quiet streets that give priority to cyclists and pedestrians, while still allowing motorized traffic at lower speeds. They’re for people who don’t want to ride on the busy arterial streets, but still need to go somewhere”.

A group of folks in the Ballard neighborhood of Seattle have been meeting to discuss Greenways, why we think they would be great for Ballard and how to organize to bring it about. We now have a name – Ballard Greenways** – and a facebook page.

Last Sunday, I organized a group ride to tour some of our proposed routes and to start promoting the idea to the community. We timed it to finish at the Summer Field Day, a kids’ event featuring outdoor games and races at a local park. A couple of neighbourhood blogs were good enough to post about the ride (Thanks MyBallard and Totcycle!), which brought us a few new folks. There was a steady drizzle all morning and I was concerned that I might have to cancel. However, the rain stopped midday, so the ride was on.

Chatting about the route as we wait for everyone to arrive.

This was the first time that I had brought Spencer for a group ride. He was very interested in this little girl in her trailer.

Spencer found it hard to resist touching everyone else’s bikes. Resist? Who am I kidding? He didn’t even try. Clearly, this will take more discussion and coaching before I try it again. However, once we got on our bikes and got rolling, he did great.

I’m afraid I don’t have any photos from the ride itself. Leading the ride, watching Spencer, and talking about routes took all of my attention. Next time, I’ll have to pass the camera on to someone with a free hand. However, it went really well. There were good discussions about the advantages and disadvantages of different routes. We were treated to a little local history about an old theatre and the old bus and streetcar routes.

I know we’ll have to be patient and that this will take a lot of work. The group rides and discussions over a beer are pure fun, but the serious organizing is just beginning. Still, I’m really excited to see how many people are enthusiastic about bringing better and safer infrastructure to our neighbourhood.

*After 10 years in the US, my writing is a random mixture of Canadian and American spellings.

This is my group ride entry for the LGRAB Summer Games 2011.