If you’re entranced by the stories behind bicycle components or the history of bicycles, have I got a book to recommend to you: 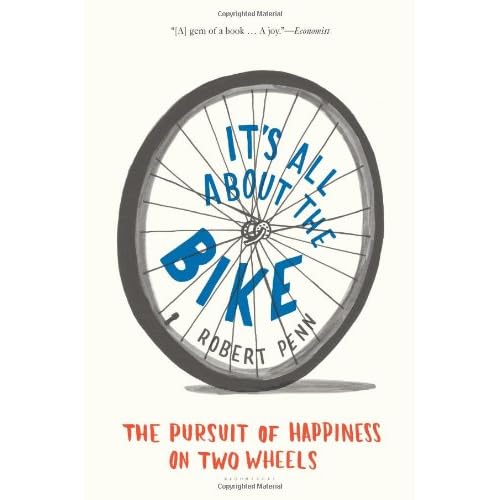 I’ve just finished reading the Kindle edition of Robert Penn’s “It’s All About The Bike“, in which he had a bespoke bicycle made and traveled to each of the factories and workshops where the components were manufactured. I’ll admit, I skim-read some of the parts about parts, and the bits about bicycle races were not for me – but the anecdotes describing the history of bicycle design kept me coming back for more. The lyrical passage in which he describes watching a legendary master at work lacing and truing a bicycle wheel is worth the price of admission all by itself:

“I’ve seen skilful bike mechanics work their magic and I had anticipated the visual pleasure. I hadn’t expected the wheel-building process to be an aural feats too. The metallic brush of the spokes being gathered in hand, the ting of a spoke as the elbow dropped into the flange, the scuffle of the nipples moving on the workbench, the whirr of the wrench fastening the nipples, the swish of the loosely suspended hub flopping about. Ping, ding, tinkle, chink, clink, jangle — as Gravy worked in silence the room was humming with the century-old melody of a bicycle wheel being made.”

I definitely feel like I have a much greater appreciation for the technical side of cycling and a deeper knowledge of bicycling history as a result of reading this book. If you’re a gearhead or a history buff, I think you’ll enjoy it too.
I’d actually suggest reading the hard copy of this, if you can. Due to the typesetting quirks of the electronic edition, I often would find myself in the middle of a paragraph before I realized that he was directly quoting the person he was conversing with. It’s incredibly annoying to have the flow of the story be interrupted by such a minor technical detail.
PS: This post is part of our series for the LGRAB 2011 Summer Games! This is a “read a book about cycling” post.