Our friend Laura bought this beauty off Kijiji last week from the original owner:

This is BeBe (short for Blue Bike). Twitpics taken by Laura.

BeBe is an Eaton’s Road King, all original (except for the kickstand we installed today at EBC), with 26 x 1-3/8 tires (with no recommended PSI marking), and paint and tire rims in incredibly good condition. We think it’s a late-1950s design, based on the finned chainguard. How sweet is that? There are similar bikes pictured in a few places, but very little information online. Also, people we met at EBC and during the bike ride yesterday were very curious about BeBe. So with Laura’s blessing we took some more photos after our ride to post for your pleasure.

The headbadge – there’s a better photo on Flikr.

The front of the seatpost – painted using a stencil,
not a decal as usually seen with English-, American-, and Canadian-made bikes of the period. 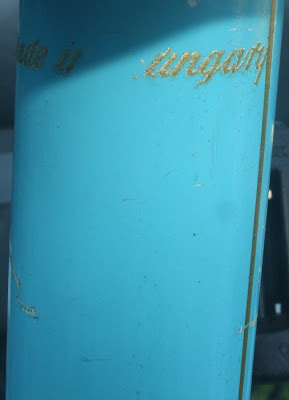 On the back of the seatpost: Made in Hungary

Lovely lines, and pretty pinstriping too. I think this was all done by hand.

The chainwheel, with cottered cranks.

There’s a serial number stamped into the fork right above this dropout. I suppose if there was more information online we would be able to use it to date the bike for certain. It has the format HL #### 57 – which suggests that possibly it stands for the plant in Hungary, four digit production series number, 1957. But that’s totally a guess.

From what others have posted on the net, it appears that this would have been sold by Eaton’s, the defunct Canadian department stores, and would originally have had a white tool bag as well. Apparently the Road King house brand was made by a number of different manufacturers over the years, including CCM, and was also used for motorcycles.

Found via Kijiji back in March:

Looking at the seller’s photos, I see a gorgeous camelback frame, an interesting and unusual chainwheel, a coaster brake, and cottered cranks. The number stamped into the frame looks like it’s year-month format and agrees with the early 1950s date you’d guess from the aesthetics. So far so good. However:

– It has an interesting double-headlamp and small brake lamp that would run off a missing bottle generator, after some tinkering and/or parts replacement.

– The lack of chainguard would be no issue for some people, but I’d definitely want one.

– The chain is rusted solid and will need to be replaced; not sure about the condition of the chainwheel.

– The wheel rims, tubes, & tires will need to be replaced (they’re 26″, but the seller is unsure of their width).

– The rear bumper needs to be banged back into shape, if not replaced outright. The front bumper is in better shape but likely also needs a little love.

– The seat might be salvagable by reupholstering, but in an ideal world you’d replace it with a Brooks.

– It needs new handles – here’s your chance to use the cork ones from Rivendell!

– In an ideal world, you’d have it professionally sandblasted and repainted. For an economical DIY job, you could selectively mask any surviving decals & chrome plus some of the original paint colour and patina, sand the whole thing down and try to clean the rust off, then use a rattle can to respray it. Maybe clearcoat it all, maybe trying to match the original green (which is likely sun-faded now), maybe gloss black. Then clearcoat over any masked areas to protect them.

– The biggest red flag for me: the listing said the bearings are seized. That could mean the entire bottom bracket has rusted through and needs to be replaced, or just that it needs to be carefully cleaned and repacked with grease that hasn’t dried to the consistency of a beeswax candle. When I asked the seller for more information on that, he said it will spin but it’s very difficult to move, and he’s unsure whether it’s due to the chain or the bearings. Either way, that’s a big job that’s well beyond my current skillset, and if the parts all need to be replaced, they’re tricky (or expensive) to come by – especially if the dimensions differ from the standard ones used by Raleigh during the period.

Tidbits found online:
– The Rex name was used by a number of different manufacturers.
– One of the Rex-es were an early motorcycle manufacturer with factories in Birmingham and Coventry in its earliest years. In 1921 they merged with another company and became Rex-Acme.
– The name Rex was also used by New York’s D. P. Harris Hardware & Manufacturing for bicycles, a Chicago company that made bicycle frames with a third wheel designed to reduce the bumpiness of a ride, and a German company who made cyclomotors and mopeds.
– An image search for Rex headbadges also turns up Rex bicycles from Sweden, bicycles made by Shelby in Ohio, and this pretty one of unknown manufacture.
– This post at Revelo describes early 70s three-speed bicycles seemingly made by Raleigh with the Rex marque. Lots of British brands were bought up by TI in the late 50s and early 60s, so perhaps a Raleigh historian could shed some light on who the marque belonged to before Raleigh took it over.

I know this one is going to haunt my dreams, especially given its rarity and sweet lines. While I dithered and went on vacation, it sold to some lucky person… if you’re that person, won’t you comment and tell us how the restoration is going?