We visited our families in Canada over Christmas. It’s always great to see family (though we won’t talk about the trip itself). We were lucky that the weather cooperated – daily highs were about 20F/-5C, which meant we were able to have lots of fun playing in the snow. Still, we were more than ready to get back on our bikes by the time we returned to Seattle. Well, at least I was ready. And Spencer could be bribed. He was very excited to wear his new Lightening McQueen racing suit, courtesy of Grandma & Grandpa (step away from the Disney store and no one will be hurt….).

While I hooked up the bikes, Spencer practiced his cool Jedi moves with the bike flag.

The goal of today’s outing was to enjoy the outdoors and get a couple of treats, so we stopped at a local pocket park. We met an senior citizen doing tai chi in the park, who asked about the trail-a-bike. Then, a couple of twin 8-year olds arrived and gave Spencer a spin. For the record, I don’t make Spencer wear his helmet at the park – he loves it and won’t take it off.

After we were finished at the park, we continued to the commercial district of Ballard. The bakery was closed, so we couldn’t buy bread. However, we could console ourselves with treats at Cupcake Royale. Aside from yummy cupcakes in many flavours, they make some of the best lattes in the neighbourhood. Given the high cupcake to mile ratio, I’m not certain if this trip was a net positive, health-wise, but it was very tasty.

The nice weather brought out many other cyclists, as you can see by the full bike rack at Ballard Market, a local grocery store. This is a sweet rack – sturdy, lots of capacity, sheltered from the rain and close to the door. However, our rig is a little bit long and stuck out into the parking lot, so I thought it would be wiser to park at the plain, but functional rack that is further to the side.

Upon leaving the store, I was delighted to see a Little Tyke parked at the bike rack. I believe that counts as active transport by anyone’s definition! Particularly for the parent, who probably had to push the kid home. All in all, it was a terrific start to 2012. Happy New Year!

On Sunday, Spencer and I set out on the trail-a-bike for a bicycle adventure. Bicycle Sunday is a program run by Seattle Parks, where Lake Washington Boulevard is closed to car traffic on summer Sundays. The weather was good and our schedule was clear, so we decided to try it out for the first time. 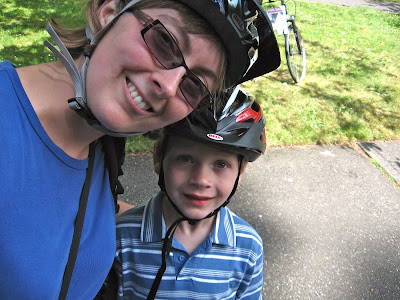 Technically, this is not a panda shot since we are beside our bikes, not on them.
Lake Washington Boulevard winds gently along Lake Washington with parks on one side and attractive houses on the other. It was a fun, family crowd, with trail-a-bikes, trailers, training wheels, and wobbly new-to-two-wheelers. 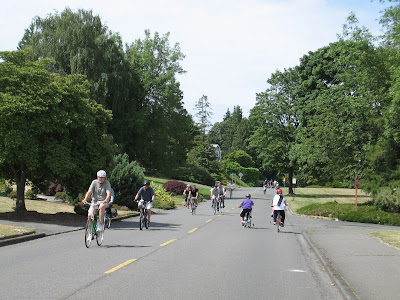 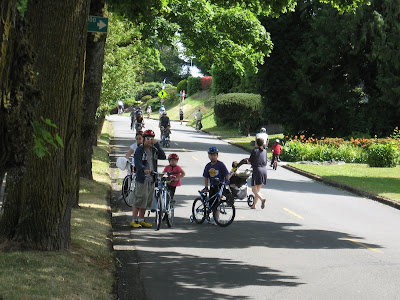 Friendly people from the Cascade Bicycle Club were out, selling and fitting helmets for new riders. 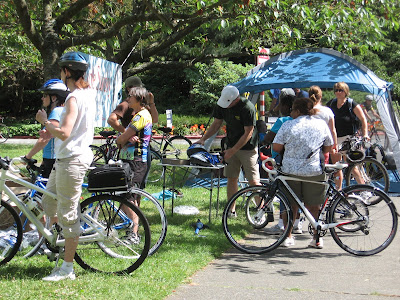 Neighbourhood kids had a lemonade stand. I don’t know how much business they did that day, but it was certainly a hit with my kid. 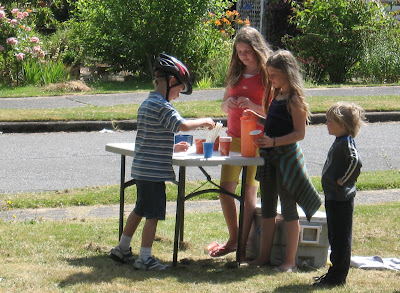 Now, Spencer wants to set up his own stand, so he can earn money to buy more toys.
Spencer: I could ask people for $5 for a glass of lemonade.
Me: No one is going to pay that much for lemonade.
Spencer: Well….what if I gave them lemonade AND let them play with one of my toys?
The protected road ends at Seward Park, home to a very nice playground. 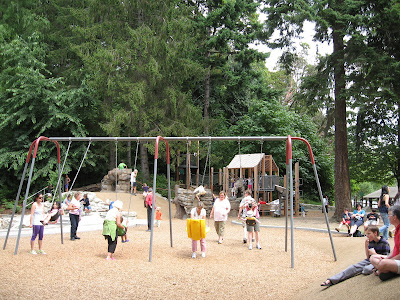 Bicycle parking was at a premium! 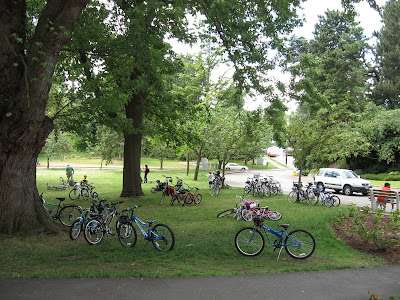 And, of course, we had to end the day with ice cream. Hey! I just asked you to HOLD my ice cream while I took a picture! 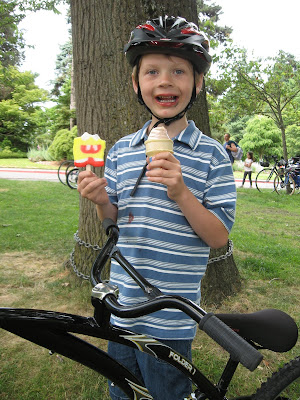 I’d never gone to a Bicycle Sunday before, so I was curious to see how the experience compared to riding in the neighborhood or on the nearby trails. The combination of wide roads and the complete absence of cars created a remarkably relaxed and fun atmosphere. In comparison, the Burke-Gilman trail is quite narrow and, on a busy day, requires a lot of attention, especially when passing or being passed. Spencer is just learning to ride a two-wheeler (sans training wheels) right now. Once he gets a little steadier, he’ll want to move beyond the school playground, but won’t really be ready for streets or even the BG Trail for some time. Bicycle Sunday will be the perfect opportunity for him to spread his wings.
All in all, it was a lot of fun and we’ll certainly go again. However, it will never be an every weekend activity – I’m not a big fan of driving 12 miles in order to ride for 3. Now, if only we could convince Seattle Parks to do a similar event in north Seattle….

A couple of weekends ago, our friend Dan came to Seattle for a visit. In between talking, eating, and drinking, we also fit in a couple of bike rides. We were very intrepid. 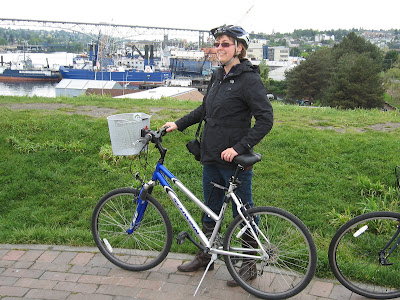 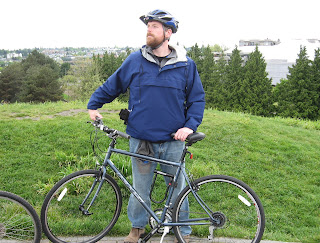 We rode to Gas Works Park, the former site of a gasification plant. When the city bought the site to convert into a park, much of the former plant was preserved. It’s a gothic, rusting hulk that makes a fascinating contrast to the lush greenery of the park. Saturday was overcast, but the views of downtown and of the boats on Lake Union are always worth the trip. 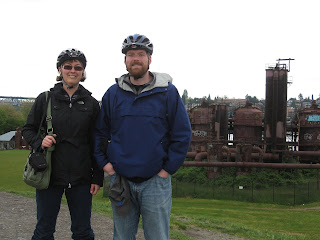 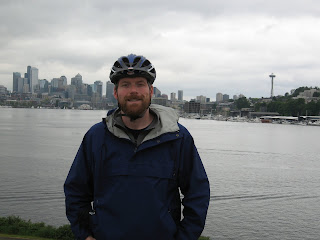 We then took the Burke-Gilman Trail to nearby Fremont, and off-beat little neighbourhood that a bit self-consciously artsy, but is a great deal of fun. We checked out a second-hand book store, Theo’s Chocolate factory, and paid homage to the troll, who lives under a bridge and is clutching a real, full-size VW Beetle in one hand. 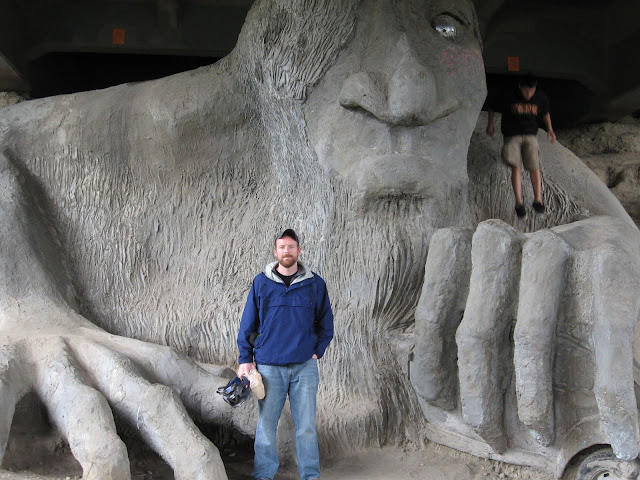 Then it was time for lunch at El Camino. The plantain chips with guacamole and pico de gallo were delicious. As were the margaritas. 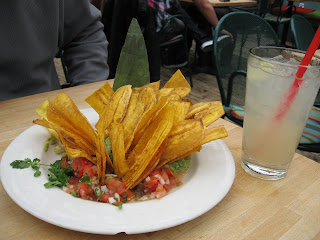 At some point in the midst of all this, we had fancy coffees and cake at Simply Desserts. It was delicious, as always. Unfortunately, I was distracted by the chocolate and forgot to take a picture.

The next day, we rode up the Interurban Trail to Carkeek Park. After making your way down a steep hill and crossing a pedestrian bridge over the railway tracks, you reach the beach. It was a bit lonely and windswept that day, but still pretty. At low tides, it’s a great place to investigate the tidal pools and sea creatures. 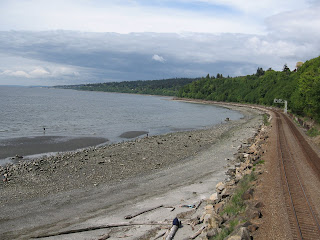 All in all, our bikes were a great way to visit and see some of the city. We kept a fairly relaxed pace, which allowed us to visit and sight see along the way. I didn’t want to use my road bike for these trips, because it’s quite a bit faster than the other bikes, making it hard to keep together. Plus it’s less comfortable with street clothes. However, we only have two other bikes, so we couldn’t all go out together. Luckily for me, Andrew took the parenting shift, so that Dan and I could go out. I may look into renting a bike next time we have visitors so that all of us can go out at the same time.

Hi folks, my name is Jennifer and I’m a friend of Deborah’s from our U of A days. I grew up on the Canadian Prairies, but have had a rather nomadic life as an adult, moving back and forth across North America for the past 10 years. My family and I have been in Seattle for a few years now and we’re starting to call it home.
Now…on to the bicycles! I’ve enjoyed riding bicycles since I was a kid and bought a mountain bike for recreational use throughout college. This was mostly moderate weekend rides of about 5-6 miles on protected bike paths. A couple of years ago, I bought a road bike which I use for my commute to work (about 6 miles) and occasional week end rides. I still have a place for my mountain bike, though, as it’s more stable for pulling my kid on a trail-a-bike. I also plan to use it more this year for short errands and outings around the neighbourhood.

Unlike the other LFL bloggers, I don’t have a vintage bicycle and I’m not really interested in restoring them as a hobby, though I do admire their style and design. My initial interest in cycling centered on practical questions of choosing a bicycle, finding routes, and figuring out the logistics of commuting. However, I’ve become steadily more interested in cycling advocacy and urban planning, particularly with respect to cycling and public transportation. Of course, I always like photos of happy people on their bicycles!

I ride a bike for several reasons – it’s great exercise and I find it much easier to stick with cycling than going to the gym. It’s cheaper than driving my car and paying for parking every day and vastly cheaper than buying a second car. Riding my bike reduces my contribution to the pollution and congestion of city streets. All of these reasons are true and they do have some motivation. However, the truth is that I ride my bike because it’s fun. There’s a greater sense of speed and control with a bicycle than a car. I see much more of the city and the seasons on my bike. And, in the end, it’s fun to go fast.
A couple of weeks ago, I hooked up the trail-a-bike and took my son, who’s five, to one of the local parks. He loves riding it – it’s faster than a little bike with training wheels and he gets to ride on the street. That night at supper, he turned to me and said “Mommy, riding a bike is so funny! It’s like your feet are running, but they’re running on sky!”
That’s why I love riding my bike.

Very simple post tonight, apologies for my personal absence lately, wedding & now a major sick to fight off = no time for blogging (barely fit in biking!)

This video though, says enough!

(PS: bear with us as we mess around with a redesign for easier readability around here!)